Too Many Herods in the Bible! 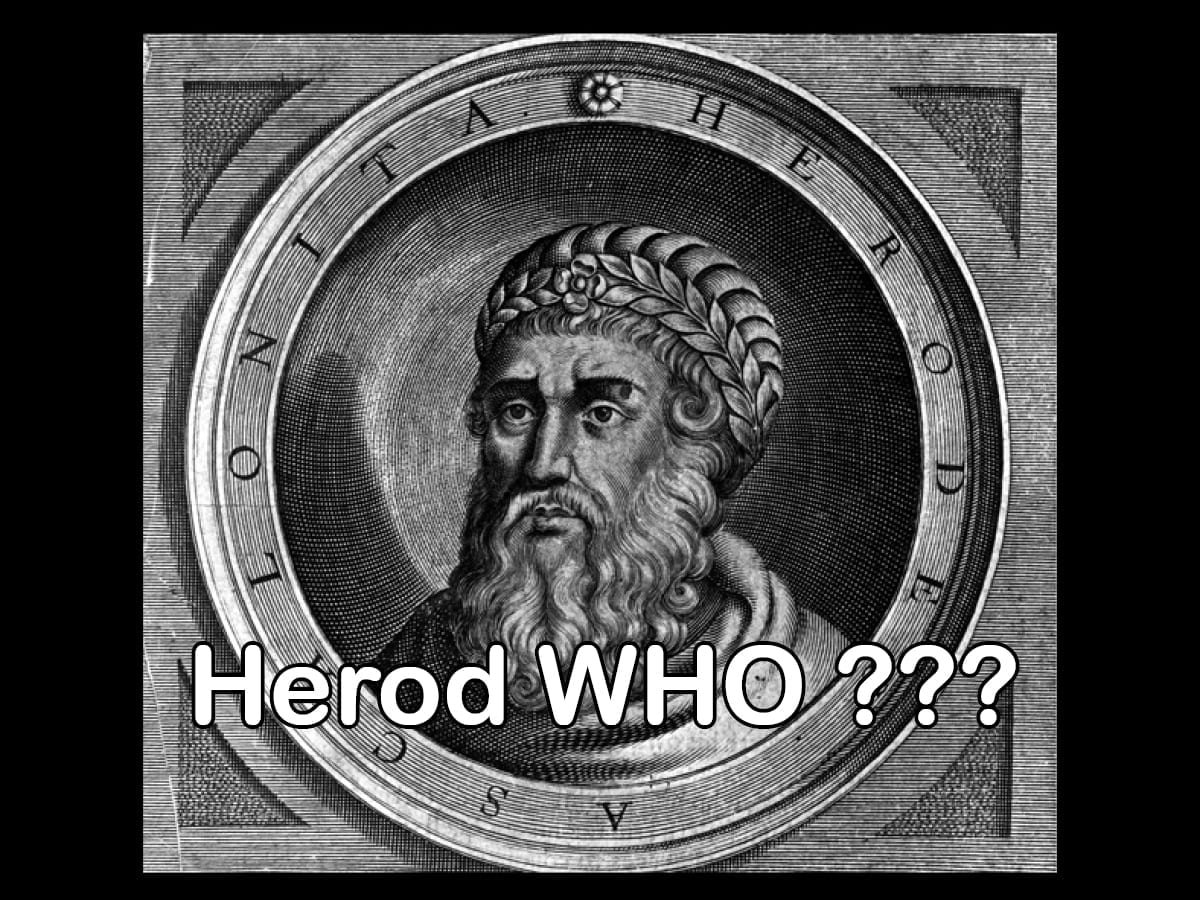 Herod the Great, the first of many Herods in the Bible

As kids, we learned about how the wise men visited King Herod to ask where they could find the Baby Jesus. He was the first of the Herods in the Bible.  Then we learned that he had died. Later we hear about the Herod who had John the Baptist beheaded, and the Herod who was eaten by worms, and so forth.

Who were all these Herods?

There were six Herods in the Bible which seems like a few too many – or at least enough to confuse us. Here is a run-down of each of them.

Herod the Great (pictured above) is the Herod of the Christmas Story. According to well established historical records, he died in 4 BC, which places Jesus’ birth shortly before that year (the folks who set up our modern calendar miscalculated the date of Jesus’ birth).

He is the most colorful of all the Herods. Among other things, he was quite the architect. His main accomplishment was rebuilding Solomon’s temple. He put a building over the Cave of the Patriarchs,

built an extravagant palace for himself, added some fortifications and a couple of extra palaces at Masada, and built many other structures.

On the downside, he was cruel. He executed his three oldest sons, and of course, we all know how he ordered the murder of the precious baby boys in Jerusalem. Herod paid dearly for his cruelty in the form of an agonizing death. His symptoms were intense itching, intestinal distress, and maggot-infested gangrene of the genitals. He could have suffered for months before his death.

Herod’s first four sons were Antipater II, Alexander, Aristobulus IV, and Herod II (also referred to as Herod Philip I). Of these, he executed the first three for various reasons. He wrote the fourth, Herod Philip I, out of his will.

The next three sons were Antipas, Archelaus, and Philip (Herod Philip II). Why he chose to name two of his sons Philip is a mystery. Herod the Great also had other sons and daughters not mentioned in the Bible.

After Herod’s death, the Roman government divided his kingdom into four sections which were ruled by tetrarchs.  For the sake of confusion, there were only three tetrarchs (Antipas, Archelaus, and Philip) who ruled the four parts of Herod’s kingdom.

Here are the three tetrarchs.

This Herod appears only once in Scripture, in Matthew 2:22. Joseph, returning from Egypt, was afraid to settle his family in Bethlehem because Archelaus was ruling there. Archelaus’s reputation for cruelty exceeded his father’s, so Joseph settled in Galilee instead, in the town of Nazareth.

Herod Antipas, Archelaus’ younger brother, was the tetrarch of Galilee when Joseph moved his family there and settled in Nazareth. He is mentioned numerous times in Scripture and is most famous for beheading John the Baptist.

When you see a reference to “Herod the Tetrarch” in the gospels, it most likely refers to Herod Antipas.

Like his brother Archelaus, Philip the Tetrarch is only mentioned once in Scripture, in Luke 3:1.

The Bible has nothing else to say about him, but historical records indicate that he married Herodias’ daughter Salome. This is the same Salome who danced at Herod Antipas’ birthday celebration.

Herod Agrippa I does not appear by name in the Bible. The only reference to him is in Acts, Chapter 12, where the Bible refers to him as “Herod the King” in verse 1. Later in the chapter, he is simply referred to as “Herod.”

Historians identify him as Herod Agrippa I. With him, we come to the third generation of the Herodian dynasty. He was the son of Aristobulus IV, Herod the Great’s third son whom he executed in 7 BC. This makes Herod Agrippa I the grandson of Herod the Great and the nephew of Herod Antipas. It is interesting to note that Herodias, who requested the head of John the Baptist on a platter, was Agrippa’s sister.

Herod Agrippa I was the first government official (that is, king) to persecute the new believers in Jesus’ Christ. He executed James, the brother of John, and arrested Peter. When an angel delivered Peter from prison, Herod had the guards executed.

Next, he went to Caesaria, where he died a terrible death. He was addressing a group from Tyre and Sidon when they shouted out, “This is the voice of a god and not of a man.” The arrogant Herod didn’t give God the glory, so an angel immediately struck him with worms. In medical terms, this was most likely an intestinal infestation of worms so severe that it killed him. The Jewish historian Josephus said that he lived in agony for five days before he died.

Herod Agrippa II is the Herod who spoke with Paul during his trial in Acts 25 and 26. He was the son of Agrippa I, making him the great-grandson of Herod the Great. The only mention of him in the Bible is in relation to Paul’s trial before the Roman official, Festus, and in this story, he is called “King Agrippa.”

Paul was on trial under Festus when he appealed to Caesar. Festus granted his request but was confused about what charges to bring against him since he hadn’t broken any Roman laws. A few days later, Herod Agrippa II shows up, learns about the case, and wants to see Paul.

Paul gives his testimony to King Agrippa, telling about how he used to persecute Christians, about how Jesus spoke to him on the road to Damascus, and that he is on trial simply for proclaiming what the Jewish prophets had said. Agrippa responds by saying, “In a short time you will persuade me to become a Christian.”

Both Festus and Agrippa agreed that Paul had done nothing wrong and could have gone free if he hadn’t appealed to Caesar.

We don’t learn anything further about Herod Agrippa II in the Scriptures. Secular history tells us that he lived until the ’90s, but his death date is uncertain. Bernice (sometimes spelled Berenice), who was present with him during Paul’s trial, was his younger sister, not his wife. Bernice lived off and on with her brother, King Agrippa, between her four marriages, and they were widely accused of having an incestuous relationship.

There is no record of Agrippa II’s marriage, and he died without children. With his death, the Herodian dynasty ended, and he was the last of the Herods in the Bible.

Who were the Herodians?

The Scripture refers to “the Herodians” in Matthew and Mark. Who were they? We don’t know much, but we think the Herodians were a political party that supported the Herodian dynasty.

In Mark, Chapter 3, they conspired against Jesus when He healed the man with a withered hand on the Sabbath.

On another occasion, they tried to trick Jesus with a question about paying taxes. This story is recorded in Matthew 22:15- 22 and again in Mark 12:13-17. In both stories, the Herodians were collaborating with the Pharisees to destroy Jesus.

So, that is all the insight the Bible gives about the Herodians. We can learn more in secular history by doing a simple google search.