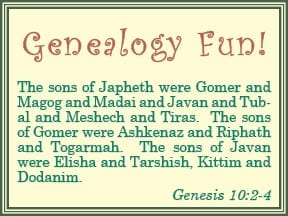 I’m a real genealogy geek, always finding something fun to do with genealogies. So, I couldn’t resist coming up with a few fun things to look for in Genesis, chapters 5 and 11.

The Bible records the birth of three of Adam’s sons, Cain, Abel, and Seth. Why aren’t the first two mentioned in this genealogy?

When I was doing evangelism work in Denmark many years ago, people would try to trip me up by asking, “Where did Cain’s wife come from?” I never had much trouble with that question because the answer is in this genealogy. Can you find it?

One of these days, millions of Christians will go directly to heaven without facing death.  It’s a future event called “the rapture.”  But there was one person in this genealogy who didn’t die.  The Bible says that he walked with God and God took him.  Who was he? What made him special? What famous man was he the father of? By the way, did anyone else go directly into heaven without facing death? (The answer is “yes,” and you’ll find him in II Kings when we get there).

Methuselah was the oldest man who ever lived. Who was the second oldest?

Speaking of Methuselah, I once analyzed the genealogy in chapter 5 and discovered to my surprise that Methuselah most likely died in the flood. Can you figure out how I came to that conclusion?

Another fun thing about the Genesis genealogies is that you can use them to calculate the age of the earth.  In 1650 an Irish church leader named James Ussher did just that.  He published a monograph that year claiming that God created the earth in 4004 BC.

I thought bishop Ussher was being rather silly, and perhaps you do too.  My preference is to let the creation scientists calculate the age of the earth.

Of course, being the genealogy nerd that I am, my curiosity got the best of me. Just for fun, I checked Bishop Ussher’s conclusion against the genealogies in Genesis 5 and Genesis 11. I placed Abraham’s birth at 2,000 BC and went from there (the reason I chose that year is because that is when some scholars believe he was born)

How do you think my research compared with Bishop Ussher’s?

The genealogy in Genesis 5 covers people who lived before the flood. What was their average age? In the genealogy after the flood (chapter 11), people’s life spans were considerably shorter. Why do you suppose these pre-flood men lived so long?

Hint for you vegans and vegetarians:  People didn’t start eating meat until after the flood.  Compare Genesis 1:29-30 with Genesis 9:3-4.